Fraxern is a sun-kissed mountain village in Vorarlberg’s Rhine valley with breathtaking views, famed for the delicious cherries they grow there in summer, and for lovely sunshine high above the fog blanket that hangs over the valley in winter. As a hiking area, Fraxern is popular all year round.

This winter-hiking route starts at the village square. First pick up the steep trail on Schmalzgasse to the settlements of Scufla and Morgengabe. On the Kugelweg trail, which also serves as access to the high-lying sports field, you reach the uppermost houses after some 20min. On the cleared, moderately steep trail you will quickly gain altitude, against the backdrop of the increasingly awe-inspiring panorama of the Rhine valley in different directions. At the sports field, the cleared mountain road merges into a broad and compact snow- trail. En route, you may take one or the other shortcut on unused or well-trodden snow trails. For convenience sake, our route follows the compacted winter trail right up to the end. Those who opt for the longer itinerary will be rewarded by glorious views. As the final point of the tour, Alpe Maisäss, which nestles scenically on a mountain flank, affords sublime views to the contemplative beholder. On the southern horizon, you can make out the Rätikon, Pizol and Alvier groups, and the adjoining Churfirsten and Alpstein with the Säntis peak in the west. Unless hidden under a blanket of fog, you can catch a glimpse of the foothills of the Appenzell Rheintal mountains and of Lake Constance on the northern side of the alp.
The same dazzling views will accompany hikers who pick the same route on their way downhill to the point of departure. 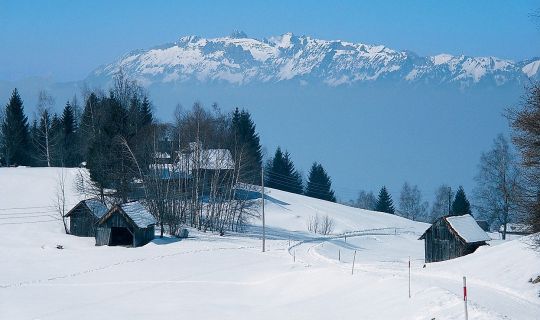 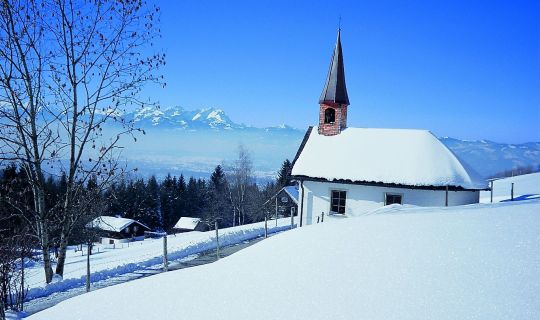 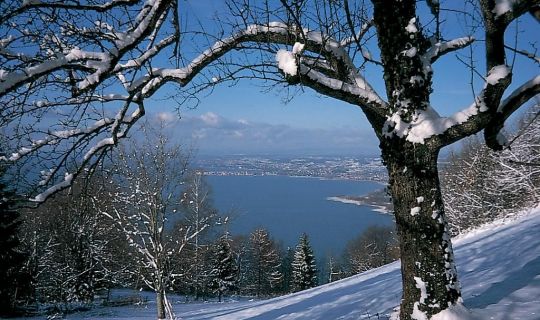